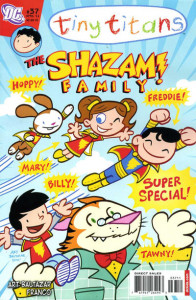 This month’s issue features the “Shazam Family” (or “(Captain) Marvel Family” of course, if it weren’t for Marvel Comics trademarking the use of “Marvel” on a comic book cover).

The overall story features Mr. Talky Tawny, the talking tiger, serving as a substitute teacher at the Titans’ school. There’s also various jokes about how the Marvels change into their identities via their magic words, which gets Psimon involved. We also get to see Mister Mind, the “world’s wickedest worm,” discover the existence of Pet Club and want in, which *also* gets Psimon involved.

Freddy in his regular identity is shown with a wheelchair here instead of a crutch (as in older appearances). Freddy also uses a wheelchair in “Billy Batson and the Magic of Shazam” (a comic also worked on by “Tiny Titans”‘s creators) and some other modern appearances. Mary here also looks somewhat like her “Magic of Shazam” self.

As in the previous few months’ worth of Johnny DC titles, more Archie digital comic ads appear in this issue.

Streaming made up two-thirds of US music revenue in 2017