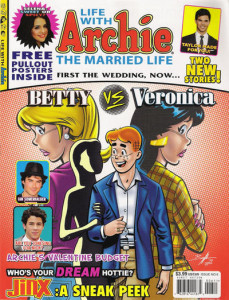 Plenty of changes in this issue for both futures, as well as the magazine itself. In the “Veronica” future, Moose’s campaign for mayor comes to a head, as does things for Veronica and Archie when they finally confront Mr. Lodge (who’s still in full-on Mr. Burns mode). Meanwhile, happiness seems to come for Reggie and Betty as well… until the end, which leads into the next story arc, “The Trial of Reggie Mantle.”

Meanwhile, in the “Betty” future, Mr. Lodge seems to have (temporarily at least) backed off, allowing the characters’ lives to resume/recover. However, the storyline is about Miss Grundy (now married to Mr. Weatherbee), with the various characters reminiscing about what they’ve learned from her, as well as how she’s affected their lives. As reported in the “New York Times” and other media outlets, this is the story where Miss Grundy passes away (of an unspecified-in-the-story illness, though apparently cancer), which is handled quite well.

Chuck and Nancy (in the “Betty” future) finally come clean to each other about their careers (they briefly appear in the “Veronica” story as well).

Another tidbit: in the “Veronica” future, Moose’s campaign is covered by “Wolff” News (Fox News), as well as a CNN parody. One guess which channel Mr. Lodge is tuned into. One oddity is the Wolff News newscast claiming the likes of McDonald’s and Starbucks were never popular in Riverdale, which doesn’t seem quite true (per various stories showing the gang sometimes visiting a conventional fast food restaurant or the mall). Nice to see Earth-Archie’s version of Fox isn’t any better at journalism (or accuracy) than the real deal…

The new backup feature, the teenaged version of Lil’ Jinx (here just “Jinx”), is introduced in a series of one-page vignettes. I found them amusing, especially Dad’s reaction to his daughter’s antics.

The usual filler material is included as well. A pullout poster featuring two sides (both taken from relatively recent Archie comic covers) is included, plus there’s a two-page spread with the core cast stating who they’d like to go out with on Valentine’s Day (Jughead’s response is amusing and appropriate; meanwhile, I had to look up who the heck Betty’s choice was—Ian Somerhalder, apparently one of the stars of those “Twilight” movies). There’s also a one-page blurb about Archie’s budget plans for Valentine’s Day with Betty and Veronica (Ron’s one expensive date!).

Next issue: the start of new storylines for both futures (it seems they’ve long since dropped the premise of Dilton hopping between Earths), as well as the Jinx backups. In time for Presidents’ Day, the advertised celebrity-feature is Barack Obama (and the Obama family). Beats seeing more teen pop celebrities I’ve never heard of, though the Sarah Palin crowd won’t be happy…