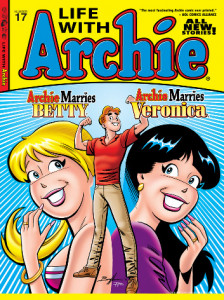 Remember how I’ve wondered if or when they’d finally advance or start wrapping up the multiverse side of this storyline? Guess my wish has been granted, as this issue shows in spades… (yep, SPOILERS ahead)

On the Veronica side of things, we learn more about Fred and Dilton’s past together, including Fred’s shady dealings dating back some ways. Meanwhile, Archie’s received divorce papers from Veronica, who’s fully flown off the deep end into (G-Rated) Paris Hilton territory. Reggie’s plans for a reality show continue unabated. And finally, the multiverse plot comes to a boil.

Over in “Betty,” Archie finally promises to pay more attention to his real day job, Midge confronts Jughead about her big news, and… Moose discovers A) what the room built into Riverdale High is and B) Dilton’s existence. Or a Dilton, anyway. Archie is invited out to Memory Lane by Ambrose, where he finally meets…himself! (More specifically, the Archie from “Veronica!”)

I’m glad to see the multiverse subplot might finally get resolved, given how long it’s been ongoing, plus I figure the comic can survive without it, as enjoyable as it’s been. I’m still wondering if there’s only one Fred, with either no counterpart or the “other” Fred someone unimportant.

You’ll note the lack of mention of last issue’s happy newlyweds. While Kevin and Clay have walk-on roles in this issue, it’s to reveal they’re leaving Riverdale to go on their honeymoon (a cross-country road trip). However, we learn Kevin will be stationed near Riverdale, so presumably they’ll be turning up in a future issue. The fictional army base mentioned is “Fort Pickens,” presumably named after Riverdale’s Civil War hero General Pickens (mentioned in the occasional Archie comic). The base is located near Hartsdale, which is a real-life town near New York City; more treatment of Riverdale being located somewhere on the east coast!