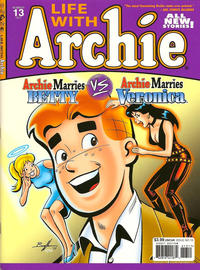 In the “Veronica” story, Archie is still trying to find a job/get used to life without Veronica… as Veronica is also (trying) to do the same. It looks like my guess was wrong—Veronica did believe Mr. Lodge’s story about Archie and a dowry (though with great doubts). Meanwhile, Reggie decides to open a garage for fixing up antique cars, and Moose welcomes Fred Mirth’s investments (who’s secretly plotting his own scheme). Mr. Lodge, meanwhile, comes up with a plan to fight whoever’s trying to take over his company (and drops a hint with the remark about “worlds of resources at his disposal”). Fred runs into Archie (literally) in Pickens Park, just before another secretive meeting with Dilton. We also see Chuck and Nancy are having problems keeping their comic shop afloat, while disagreeing on whether to take their comic strip to a big national syndicate.

There’s also a scene with Ethel and Jughead meeting up at the Chocklit Shoppe. Unlike the present-day versions (Jughead’s antipathy toward Ethel/Ethel’s aggressiveness toward trying to date Jughead), these versions behave like the adults they are, and thus treat each other much more maturely here (as old friends).

Over in the “Betty” future, we start with Dilton and Jughead (in a flashback to the present) discussing Archie’s experience with Memory Lane (as seen in its first appearance). Dilton seems skeptical, but plans on calculating how such a street’s existence is possible. Back in the “Betty” future, we see Betty try to comfort Mrs. Lodge over Veronica going missing… which is also stressing out Mr. Lodge, who’s calling in every resource at his disposal to find Ronnie. Meanwhile, Jughead and Archie discuss current events. Jughead mentions Midge being “a little tired lately”… which is a probable hint at a future storyline, if the original “Archie Marries” storyline is any guide. Mr. Weatherbee indicates the high school will be rebuilt, with Moose being hired on as a consultant. Mr. Weatherbee notes here he’s been a high school teacher for “five decades,” presumably including his time as principal at both Riverdale High and as principal of Riverdale Elementary in the “Little Archie” stories.

And speaking of Little Archie, Ambrose shows up at the Andrews’ door, with a proposal for Archie: to help run a Riverdale franchise of his New York nightclub. Chuck and Nancy get a page, where we see that Chuck’s jealous of his wife’s success. Fred Mirth shows up near his mines outside of Riverdale, in a way that makes me suspect that, unlike Archie and the gang, there’s only *one* version of Fred among both worlds (or if he has a counterpart, he’s not a relevant or high-profile one). Finally, Dilton meets with Mr. Lodge, as does… the Mr. Lodge of the “Veronica” world.

Quite a bit of material in both stories. I’m wondering if the Dilton/Fred/Mr. Lodge parallel Earths side of this storyline is being *too* dragged out by this point, though they do tie somewhat into what’s going on with both stories’ events.

I noticed Jughead (in the “Veronica” story) mentions to Archie a time when Betty and Veronica were in an auto accident during a snowstorm… which is the subject of an upcoming story in “Betty & Veronica.”

As per the current direction, there’s no “Teen Beat” style filler material here, save a “Celebrity Daydreams” page where Jughead and Dilton imagine themselves/some of the gang as the cast of “The Big Bang Theory.” Newcomer Archie character Raj Patel makes the cut here, with an amusing caption “Raj as… um, Raj,” who I take is also a character on the show; I’ve not seen “Theory” before.