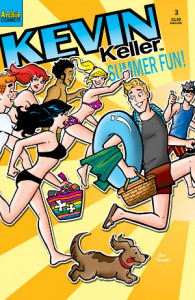 Summer’s arrived in Riverdale, and with it, a summer job for Kevin: being a lifeguard at Riverdale’s beach. Cue the appearance (“Townies” trademark insult and all) of one Cheryl Blossom, along with her entourage of friends, including a homophobic cohort named Sloan. Akin to a 60s teen beach movie, Cheryl’s cohorts challenge Kevin, Archie, and the gang to a surfboarding contest, which Kevin enters.

This was an enjoyable issue, with Kevin getting the usual support from his friends (and making a new one…). One oddity: I wonder at what point Kevin met Cheryl, since he seems familiar with her (and her personality) upon “rescuing” her. Though given the high number of adventures the Archie gang must have in a single year (fun with comic book time!), I suppose the two secondary characters eventually met off-panel…

Next issue, Kevin and the rest of the Keller family head off to London for the 2012 Summer Olympics, in a story that’ll probably see the name of the event reworded for future digest reprints, per its topical nature…