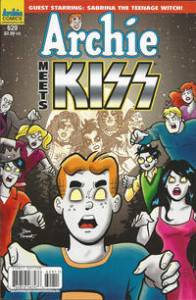 The third issue of this storyline is, well, as bizarre as the rest of this story so far. To wit (SPOILERS): Archie’s de-zombified, KISS use their rock music powers to temporarily stymie the monsters, an amulet the monsters are in possession of is what’s letting them turn people into zombies, and a view at what happened to a previously zombie-fied town. (Hey, I like my smartphone!) We also see Veronica and Reggie on their own dealing with monsters at school, and discover (via Kevin Keller, in a cameo appearance) that music can slow the monsters down. The issue ends less than stellar for the Archie gang, however.

Like I said, bizarre. Nice to see Sabrina get some moments, including (in an infrequent bit of Archie continuity) a reference to her manga series from a few years ago (she mentions having gone to charm school, which is what started the manga-era storyline). A few amusing lines as well, such as Ronnie’s concerns (for vapid reasons) about becoming a zombie. As for Kevin, yep, they’re promoting him heavily like any other comic company would, though I noticed even back in issue #1 that the vampire looks a lot like Kevin with brown hair and fangs—his long-lost other-dimensional “cousin?” (Stranger things have happened… like, well, Archie meeting KISS.)

Next issue wraps things up… and not just for the story’s mummy, either.