Close menu
Home › Diverse Media Notes › Cartoons at the box office: “Spider-Man” does whatever a franchise can 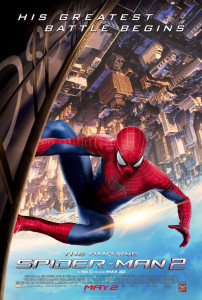 “The Amazing Spider-Man 2,” as expected, spun a box office (any size) and caught customers just like flies. The sequel to a reboot made for cynical reasons (so Sony could avoid having its rights to Spidey revert back to Marvel) took the top spot at the box office this weekend, earning $92 million. Overseas, it’s earned $277 million, for a global total to date of $369 million. There’s no production budget given on Box Office Mojo, but the first film’s budget was $230 million. Assuming a similar budget size for this one, it’s easily earned back what it cost and then some.

Meanwhile, “Captain America: The Winter Soldier” came in fourth place, earning $7.8 million for a total to date of $237.1 million domestically and $442.7 million overseas, for a global total of $679.8 million. It’s now surpassed the total global take of last year’s “Man of Steel,” and still set to earn more. No wonder Time-Warner’s desperately loading up the “sequel” to “Man of Steel” with everything but the kitchen sink.

“Rio 2” was in fifth place, earning $7.6 million, for a domestic total of $106.5 million and overseas total of $247.8 million, for a global total of $354.3 million. I haven’t seen the original, but guess people overseas must love this film for whatever reason.

Next week sees a “Wizard of Oz” animated film open, “Legend of Oz: Dorothy’s Return.” Though Box Office Mojo doesn’t have much information about it, its TV ads make it look like another low-budget space-filler a la “Hoodwinked.” While it might grab some audience away from “Rio 2,” the next major animated film to watch out for (and only major animated project this summer, oddly) is “How to Train Your Dragon 2.”