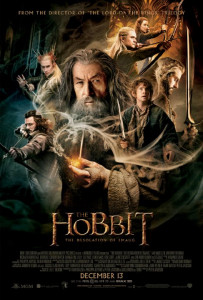 This weekend before Christmas is seeing a fair amount of competition, with various new films opening or being released widely. However, “The Hobbit” sequel “Desolation of Smaug” is still #1 this weekend, taking in $31.4 million and earning $127.5 million to date. “Anchorman 2,” despite its massive marketing hype, only came in at #2 with $26.8 million (and $40 million to date).

Meanwhile, “Frozen” continues to be the film with the minus touch (to borrow a cold-weather pun from “Courage the Cowardly Dog“), as it’s still a big holiday season hit. “Frozen” came in this weekend in third place, earning $19.2 million for a total to date of $191.6 million.

“Saving Mr. Banks,” the film about Disney’s (glossed-over) take on the making of the “Mary Poppins” movie, opened in widespread release with $9.3 million, for a total so far of $9.9 million.

“A Madea Christmas” has fallen to seventh place with $8.5 million this weekend, earning a total to date of $28.3 million. Since I assume it didn’t cost much to produce, it’s surely made a profit by now.

The new CGI animated film “Walking With Dinosaurs” (with the voices of Justin Long, John Leguizamo, and Karl Urban) opened in eighth place for $7.3 million. Doesn’t sound promising, especially since it cost $85 million to produce, according to Forbes.