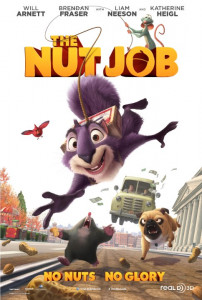 This weekend at the box office sees the first new major animated entry in awhile, “The Nut Job.” Apparently families must’ve desired something new to watch other than “Frozen,” as it opened in third place, earning $20.6 million. Forbes suggests that this film will probably do OK until “The Lego Movie” comes out next month.

Meanwhile, “Frozen” still is raking in money, despite “The Nut Job” and several other new films opening. “Frozen” fell to fifth place, but earned $12 million for a total to date of $332.6 million. With “Frozen” up for the animated feature Oscar, that might keep it somewhat in the spotlight (or theaters) for awhile longer.

“Saving Mr. Banks” fell to tenth place, earning $4.1 million for a total of $75.4 million. For whatever reason, “Banks” didn’t impress Oscar voters, only having one nomination.

Next week only sees one new movie opening (a Frankenstein film), so next week’s numbers might be similar.