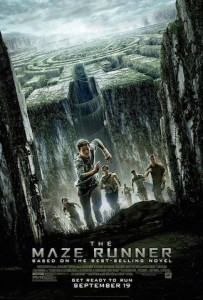 The young adult novel-based sci-fi thriller “The Maze Runner” came in first place this weekend at the box office, earning $32.5 million. The film cost $34 million to produce, and already has earned $49 million overseas, for a global total of $81.5 million. Not surprising that they’ve already greenlit a sequel, due out in 2015.

“Guardians of the Galaxy” came in sixth place, earning $5.2 million (-36.1%). The film’s totals now stand at $313.7 million domestic, $318.6 million foreign, and $632.3 million globally. Not adjusted for inflation, it’s now the fourth biggest grossing Marvel Cinematic Universe movie, surpassing “Iron Man 2” this weekend. It should surpass the original “Iron Man” either this week or by this time next weekend.

Opening next weekend are two films: “The Boxtrolls,” the stop-motion animated film (and first animated film since “Planes: Fire & Rescue”), and “The Equalizer,” starring Denzel Washington.