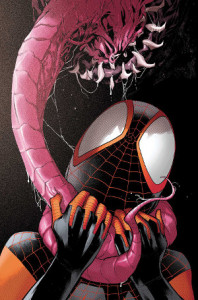 Here’s what’s of interest out from Marvel for January 2013.

This month sees more of the new “Superior Spider-Man,” which Dan Slott is writing, but not much (as of this writing) is known about. Still, I’m not particularly interested in reading about a mainstream Marvel Universe replacement-Spidey; I can still recall that awful Spider-Clone junk from the 90s.

“Dying Wish” is a hardcover collection of the final (for now) issues of “Amazing Spider-Man.”

Meanwhile in the Ultimate universe, Miles Morales faces off against some Ultimate version of Venom.