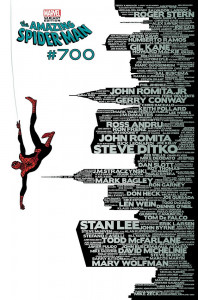 Here’s what’s of interest from Marvel for December 2012. Full solicitations are available here.

A lot of Spidey this month, as “Amazing Spider-Man,” his longest-running title, hits an extra-sized issue #700. One big damper on the anniversary-fest, however: the solicits mark this as the “Final Issue.” Apparently, it’s true (per writer Dan Slott’s Twitter account)—they’re (seemingly) axing one of their longest-running titles. While I’d hope it’s just another case of Marvel messing with issue renumbering/rebooting (see the zillion Fantastic Four relaunches within the past decade or so), or the “Marvel Now” half-attempt to mimic DC’s “New 52,” it still leaves me with one less comic from DC or Marvel to read. There’s also no indication (as of this writing) what Slott’s next book will be.

Meanwhile, Miles Morales’s still caught up with the Ultimates. Of bigger interest is the mention of his family in the solicit…