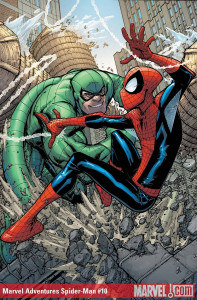 What I’ll be buying:

My main observation is that there’s no “Super Hero Squad” comic being released this month. Can I assume the comic’s been canceled? Which would keep with the treatment its parent TV show is receiving; “Super Hero Squad”‘s second season debuts this Saturday, October 23rd at…5:30 AM (Central Time). Not the best of time slots Cartoon Network could’ve given the show.

“Spider-Man” centers around Spidey teaching the superhero trade to a new heroine, while old Spider-Man villain the Scorpion is on the loose again. Meanwhile, “Super Heroes” centers around a subplot from recent issues coming to a head.

In the regular releases, there’s a lot of anniversary issues being released (Captain America’s 70th, the Fantastic Four’s 50th, etc.). There’s also a timely story in “X-Factor,” one of the myriad of “X-men” titles, that centers around the subject of bullying. The story’s written by Peter David, so I assume the subject will be given the respect it deserves.