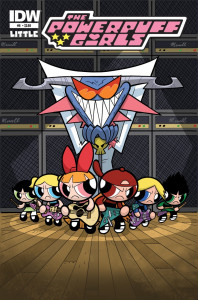 Here’s what’s of interest from various comic companies for May 2014.

The Rowdyruff Boys and the Boogie Man in this month’s “Powerpuff Girls?” Sounds interesting…

The all-new Millarworld Universe kicks into high gear with the launch of Millar and Fegredo’s fast and furious miniseries. When a group of hard-luck teens in Motor City stumble upon a street drug called MPH, they gain the power of super speed. Will they use it to save the world? Hell no! Not when there’s dolla, dolla bills to be had, y’all. A high-octane urban adventure, MPH brings you super speed like you’ve never seen before! This launch features a variant cover by Jock, a blank cover variant, and a special series of linked cover variants by Fegredo showcasing the book’s cast.

“Dolla, dolla bills to be had, y’all?” Really? Since obviously superpowered minorities (which is who’s clearly being implied from the description’s “street slang”) from a depressed urban area wouldn’t use their powers to better their environment. Never mind the various and more interesting/less insensitive story ideas one could get from such a premise. (Who’s making the drug, and why? How does it work? How does their family/community/the world react to basically having the Flash around? And so forth.) Glad nobody told the Milestone Comics founders this when they created their highly-praised universe of minority characters, who operate in “Dakota,” a fictional Detroit analogue.

From a brief Google search, Mr. Millar seems to have had some previous complaints about how he’s written minorities in other comics, as well. Yes, there are Black supervillains (Aquaman’s foe Black Manta the most famous of them), but a comic where it sounds like all the characters are implied to be minorities, money-grubbing and unheroic seems problematic to me.