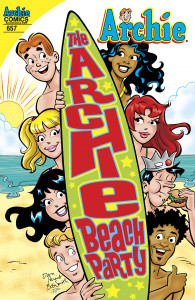 Here’s what’s of interest coming out from Archie this June. Full solicitations are available here.

This month sees some big changes coming to Archie’s line of digests. For starters, they’ve finally dropped the name “Double Digest,” which admittedly no longer makes sense with the “regular” size digests having been cancelled years ago. Instead, they’re now using the name “Comics Digest.” Oddly, the solicitations still have the old “Double Digest” term being used, though probably just an adjustment period.

On another note, the “Comics Digests” are now priced $1 higher than before, making them $5 each. The 320-page “Jumbo Comics Digest” (the former “Double Double Digests”) are now $7. Given the digests are the best-selling non-Sonic Archie books, I can see why they might want to try raising the price (inflation issues aside). The regular pamphlet Archie comics (which now only consist of “Archie,” “Afterlife With Archie,” “Betty and Veronica,” and “Kevin Keller”) are still at $3, though I wonder how much longer that’ll last, with $4 now the norm across the comics industry.

On yet another note, the digests are introducing the idea of extra-long, 192 page “Annuals,” with “Betty and Veronica Comics Annual” #224. I wonder why it wasn’t called “Comics Digest Annual” and/or numbered at #1 (as a separate series to the main digests), since the numbering otherwise looks a bit confusing. (Plus, #1’s sell well…) There’s also whether annuals are still a draw for readers; Archie used to publish annuals decades ago, but hasn’t done so for its non-Sonic books in ages. Still, Marvel and DC have begun publishing annuals again, after stopping for some time, so I guess there’s still enough of an interest in them.

No Chuck on this month’s covers, but newcomer characters Toni Topaz and Trev are on several this month, as does Chuck’s girlfriend Nancy (on a reprint collection). Toni is the purple-haired girl that keeps appearing on many recent Archie comic covers; she was a cupcake-eating rival of Jughead in a story a few years ago. Trev (the African-American guy on the bottom right of the cover I used in this post) is the brother of Valerie (of “Pussycats” fame), and is seen occasionally dating Betty.

Finally, “Betty and Veronica” sees part 1 of a storyline that shows the girls leaving Riverdale “for good.” This premise was originally going to be used in a “Veronica and Betty” magazine (in a similar format to “Life With Archie”) that never got off the ground. While an interesting story idea, I guess it’ll be a slow-moving storyline, with “Betty and Veronica” only published bimonthly these days.