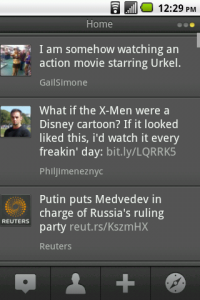 Lately, the app I’ve been using for posting to Twitter from my smartphone is TweetDeck. TweetDeck was originally developed as an independent app, before being bought last year by Twitter. I started using TweetDeck after wanting an alternative to Seesmic.

TweetDeck offers basic functions for using both Twitter and Facebook. For the former, one can retweet tweets, mark various tweets as “favorites,” and upload photos taken (with a choice of photo hosts, YFrog or TwitPic). For the Facebook side, one can mark posts as favorites, respond to posts, and share posts.

TweetDeck also displays the above in separate swipable “columns” (swipe the screen left or right to move to the next service), along with (by default) columns for one’s own direct messages (in Twitter) and responses to one’s posts. Columns may be added or deleted (say, a column for displaying results for specific search terms).

TweetDeck works reasonably well, though on my smartphone (admittedly a low-end model LG Optimus model), deleting text when editing a message feels sluggish. Another flaw is the Facebook function doesn’t indicate whether one’s own posts (viewed in the feed listings) have any responses, unless directly read. There’s also the lack of making available pre-bookmarked search terms from Twitter itself.

No ads are displayed in TweetDeck, presumably as a result of being directly owned by Twitter, versus Seesmic’s recent changes (the free version now features ads).

For an alternative to TweetDeck, Seesmic also works well.

Twitter can support an open platform without tolerating the “alt-right”

Favorite articles roundup for the week of August 23, 2019