A new episode of “The Looney Tunes Show.” This one’s better than last week’s, but don’t expect much humor here—oddly, this one has more emphasis on action/adventure than humor (or rather, the sitcom-style humor of this show). SPOILERS below.

Plot: A charity bachelor’s auction run by Porky sees Bugs “won” by Lola, who takes him on her 24-hour date to Paris. Meanwhile, Daffy is “won” (for “two bits”) by Granny, who regales him with a tale of how she was a spy during World War II.

Lola makes her return in this episode (apparently newly divorced, separated and/or forgotten that she’s married to Pepe Le Pew). While she’s still somewhat annoying, it’s probably less so than Lola was in her debut episode. 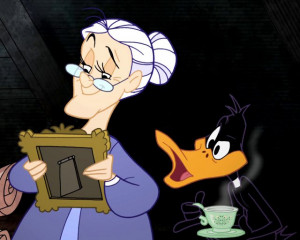 No Merrie Melodie this week, but we do get a CGI Road Runner short. This week sees the Coyote (reminiscent of 1979’s “Freeze Frame” and a few original series shorts) spray the desert with snow, then try to catch his prey while wearing a speed skater’s outfit.