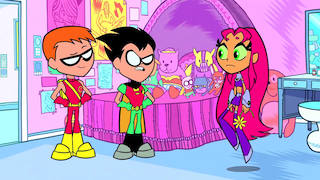 This week’s “Teen Titans Go!” episode was pretty funny, though I liked the second one more than the first. SPOILERS ahead…

Plot: Cyborg and Beast Boy trick Raven into making magically-created clones of themselves. Hijinks (and a twist ending) ensue.

Raven’s powers in this series seem to be much more powerful than in the original “Titans” show. All the better for comedic moments, I guess.

Still wondering if Beast Boy’s vegetarian or not in this show. Beast Boy seems to not mind eating what looks like pepperoni pizza, though tofu chips are also seen. Unless it’s some sort of meatless pizza topping, though I’d figure Cyborg would throw a fit about that. (Or not, since he ate that block of tofu with barbecue sauce in the original series…)

Plot: Starfire decides to go on a date with Speedy, which Robin resents, to the point of kidnapping Speedy/disguising himself as Speedy to sabotage Starfire’s interests in the archer hero.

Despite Robin’s less-than-heroic nature in this episode, I thought this one was funny. Making it even funnier is the episode quietly pointing out that Speedy originally was just a knockoff of Robin, as Green Arrow’s longtime kid sidekick. Similarly, Green Arrow himself was a knockoff of Batman for much of the Golden and early Silver Age.

Since the 70s, Roy Harper (Speedy’s real name) has largely struck out on his own as a hero, taking up several different names (“Arsenal” seems to be the longest-lasting one), plus kicking an addiction to heroin (from the early 70s Green Lantern/Green Arrow storyline). Roy even had his own daughter at one point, per DC aging the sidekicks while not aging their mentors as much.

The restaurant Starfire, Robin and Speedy go to looks like Seattle’s Space Needle, which does have a restaurant inside. I’m not sure if Jump City is based on any particular US city, beyond being on the west coast.

I noticed both episodes had a theme of fake doubles replacing the real versions of individuals.