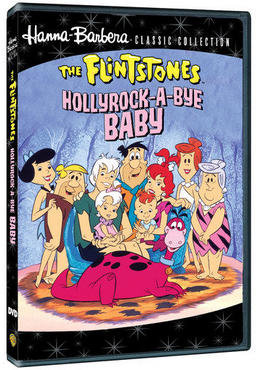 Just announced today by the Warner Archive program (Warner Bros.’ online sales of less-popular or more obscure movies and TV shows burned to DVD-Rs) is the release of the Flintstones’ various primetime specials and several TV movies to DVD for the first time. This includes the various late 70s/early 80s primetime specials that aired on NBC, meant to bring the modern Stone Age family back into the limelight (outside of Saturday mornings and syndicated reruns). While most of these were released years ago to VHS, they haven’t appeared on DVD until now.

The DVD releases are summarized on TVShowsOnDVD.com, and consist of:

The 1993 TV movie that sees the adult versions of Pebbles and Bamm-Bamm finally getting married.

One bizarre retcon of how Fred and Wilma get married mars this one. This film in a flashback shows Fred and Wilma having eloped to Rock Vegas to get married, which feels awfully similar to how Homer and Marge got married on “The Simpsons” (the 1991 episode “I Married Marge” showed Homer and Marge marrying at a clearly-Nevada-style wedding chapel). The original series, however, showed Fred and Wilma having gotten married at a mountain resort. There’s also the oddity of most of the wedding guests being friends or relatives of Fred, Barney, Betty, and Wilma, and not Pebbles and Bamm-Bamm’s friends (save two coworkers of Pebbles’ that look/act like Penny and Wiggy from “The Pebbles and Bamm-Bamm Show,” but aren’t Penny and Wiggy…).

In this TV movie, Wilma and Betty are shown starting their own catering business. The catering job might be a reference to the comic strip “Blondie” having then-recently given Blondie such a job (over Dagwood’s initial objections). These aren’t Wilma and Betty’s first permanent jobs, however: they were formerly reporters for the “Daily Granite” newspaper in the 80s “Flintstone Comedy Show” Captain Caveman segments.

The 1993 sequel to the above, this TV movie shows the newlywed couple (Pebbles and Bamm-Bamm) moving to Hollyrock, where they expect the birth of their child—or children, as it turns out to be twins: super-strong white-haired daughter Roxy, and red-haired son Chip. The elder Flintstones and Rubbles show up before the blessed event, with the usual Flintstone hijinks ensuing. I liked this one more than the first film.

The puns were also flying a bit more here, given the Hollyrock setting: there’s apparently a Janet and Michael Jackstone; Hollyrock sights include the “Clay Museum” and “Granite’s Chinese Theater“; plus we see animation studio “Hanna-Barberian Productions” (the home of “Yogi the Cave Bear”; Yogi Bear’s prehistoric self’s TV show was mentioned on the original series).

Apparently, the adult married Pebbles still goes by her maiden name for professional purposes, though IMDB lists her name as “Pebbles Flintstone-Rubble”…

The release of all of these to DVD, especially the two 1993 TV movies, has been long anticipated. With the release of these, the only remaining Flintstones material not available on DVD would be:

I imagine all of the above will see a release eventually through the WB Archive program.