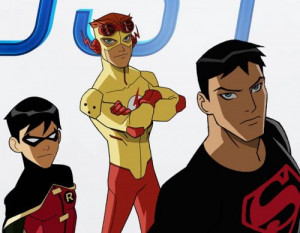 Since its series debut on Cartoon Network, I’ve been giving a go at watching the new “Young Justice” animated series. Unfortunately, I’m left underwhelmed by what I’ve seen.

“Young Justice” was originally a 90s DC Comic that featured several teen sidekicks (Robin, the modern Superboy, speedster Impulse, etc.) as a superhero team mentored by JLAer Red Tornado (the android hero with tornado/wind powers). Operating out of the JLA’s original headquarters (the “Secret Sanctuary” cave in the fictional town of Happy Harbor), the team engaged in adventures similar in tone to the 2000s “Teen Titans” animated series, i.e., sometimes serious, sometimes goofy. The comic was a mostly fun affair, aside from attempts, probably handed down from editorial, to apply the ill-conceived, now-dead 90s retcon of “Batman’s an urban legend” to Robin.

The new “Young Justice” TV series, unlike the comic (or the previous “Teen Titans” animated series), is a rather serious affair, and not remotely as light-hearted or fun as its predecessors. Among other changes, there’s a heavier amount of angst present, including the sidekicks not wanting to be treated as sidekicks or “kids.” Superboy, here making his first major animated appearance (not counting the Kal-El Superboy in the 60s shorts), is much more humorless than in the comics. There’s also fewer female characters present in this series, unlike the comic’s version of the team (which had a decent presence of superheroines for most of its run) or the “Teen Titans” TV show.

I’ll list below my pros and cons of “Young Justice”:

Robin’s 3D holographic wrist computer is pretty cool looking. Said gizmo might be a welcome addition to his arsenal in future versions of the character (if it isn’t already being used)…

Batman’s written as competent but aware of the teens’ needs, and resists giving into the obnoxious, one-note “jerkass” characterization common to many modern versions of the character.

Nice to see Clark and Bruce as friends (and Clark with the fedora he wore in many Golden/early Silver Age stories).

Aqualad is well done here, and has an interesting use of water-manipulation powers.

The handling, and low number, of female characters. Unlike the YJ comic, this team apparently will only have two recurring female members… however, despite being multiple episodes into the show’s run, we’ve only seen *one* of them introduced so far, Miss Martian. (Artemis has yet to appear, despite being depicted in all of the show’s ads/promotional materials.) It doesn’t help that Miss Martian’s to-date centerpiece episode consists of her teammates belittling her powers (despite being, well, a *telepathic Martian shapeshifter*) or yelling at her for most of the story, until the final villain battle/resolution. The show’s producer gave a rather poor response when questioned about the lack of female characters, as Comics Worth Reading discusses, which doesn’t inspire much confidence.

Teen angst and “Emo Superboy.” This version of Superboy, unlike his comic book counterpart (pre- or post-Crisis versions), is apparently meant to be the “sullen” member of the team a la Wolverine in the X-Men. To that end, he’s perpetually angry or scowling and lacks any semblance of social skills (blamed on how he was created). I find Superboy’s characterization here as quite tiresome and annoying, and lacking what makes Wolverine—or Superboy period—a fun character. (Speedy’s similar angst also got on my nerves, but he’s not around as much as Superboy is…)

Superman as an out of character, “Maury Povich Show”-like “deadbeat dad.” In pretty much every other incarnation I’ve seen, Superman never treated anyone with even a tenuous connection to Krypton like how he treats Superboy in this show. Superman’s always been glad to see another survivor of his deceased home world, or someone vaguely connected to such (that wasn’t a Phantom Zone crook, of course).

Additionally, Superman was never hostile toward Superboy in the comics, and has even welcomed him into the Superman-family fold, giving him a Kryptonian name, etc. Nowadays, Superboy (at least last I checked) is even using Smallville as his base of operations. However, in “Young Justice,” Superman’s shown ignoring or treating coldly Superboy, and even tells Batman “he’s *not* my son!” It all comes off making Superman look out of character and badly written (and resembles the similar “deadbeat dad” plot point in “Superman Returns”).

This, along with the other cons listed above, makes this one “strike three” for me, though I imagine fans of the crudely-named “Superdickery” website well eat this version of Supes up. Yes, I’m well aware of Superman placing the Silver Age Supergirl in an orphanage after her arrival on Earth, but despite said dubious decision, he never spurned her the way he’s shown spurning Superboy in “Young Justice,” and openly welcomed her as a relative. Additionally, Superman helped train Kara in the use of her powers, and helped start her own super-career.

Overall, the “cons” outweigh the “pros” for me, and thus I don’t plan to continue watching this series. Fortunately, “Teen Titans” is available on DVD, plus reruns air regularly on Boomerang. Comics-wise, there’s “Tiny Titans,” plus DC’s started reprinting the 90s “Young Justice” run. Plenty to satisfy my desire for stories featuring Robin and company…