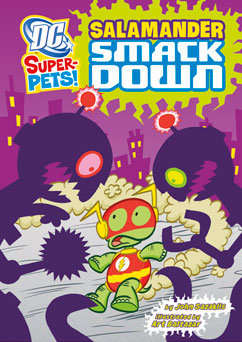 On the heels of last year’s batch of books about the pets of various DC heroes (Superman’s dog Krypto, Batman’s dog Ace, etc.) comes this follow-up. A half-dozen “DC Super Pets” books will be released this fall, featuring more of DC’s animal heroes. The Brave and the Old blog has a list of all the books, complete with covers; my two cents on each of the characters featured follows:

While I suppose the Aquaman Shrine will be disappointed that Topo won’t be reappearing (ditto Batman fans about Ace), Flash fans should be pleased to see the Terrific Whatzit (or a modernized version of him) showing up, as will Captain Marvel fans seeing Hoppy.