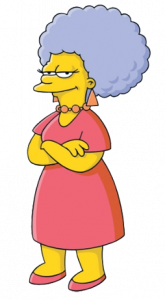 This week’s “minorities in cartoons” entry is Patty Bouvier of “The Simpsons.” Patty (along with her twin sister Selma) is Marge’s older sister.

Patty and Selma both share Marge’s raspy speaking voice, but unlike Marge, are usually shown as completely cynical and frequently bitter. The two live together in an apartment, are both heavy chain smokers, and work together at Springfield’s Department of Motor Vehicles bureau. Patty and Selma often take various (dull) vacations, to which they subject the Simpsons family to interminably boring slideshows.

Another prominent gag in earlier episodes was their obsession with the TV show “MacGyver.”

Patty and Selma both like Marge and the kids, but utterly loathe Homer. Their contempt extends to insulting him unprovoked. One example is greeting the family with “Hello, everyone except Homer” in season five’s “Lady Bouvier’s Lover.” Needless to say, in Homer’s case, the feeling’s mutual. Homer refers to Patty and Selma as “the Gruesome Twosome” in the season one episode “Krusty Gets Busted.”

While Selma’s obsessed with dating (out of fear of being alone), Patty in early episodes is shown as disinterested. An exception is the season two episode “Principal Charming,” where she dates Principal Skinner. When Skinner proposes marriage to her, Patty is flattered, but refuses, not wanting to leave Selma alone.

The season 16 episode “There’s Something About Marrying” sees same-sex marriage legalized in Springfield. Patty comes out as a lesbian, and attempts to marry a woman she’s dating. The wedding is called off after Patty discovers her fiancee is really a man.