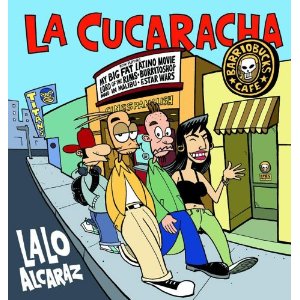 This week’s “minorities in cartoons” entry is the comic strip “La Cucaracha,” written and drawn by Lalo Alcaraz.

A political strip, its name is Spanish for “the cockroach.” In this case, one of the main characters is a six-foot (1.8 meters) tall anthropomorphic, clothed cockroach named “Cuco Rocha.” Cuco shares an apartment with his best friend, Eddie. Other recurring characters include:

As expected, current events are heavily remarked upon. Issues affecting Latinos (and to some extent, African-Americans/other minorities) are also covered. A recurring gag is the strip being done as a parody of “The Boondocks.”