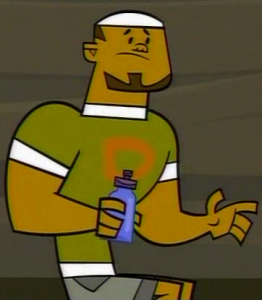 Continuing along with the “Total Drama Island” theme of the past few weeks, this week’s “minorities in cartoons” entry is DJ, one of said show’s cast members. (No relation to A.J. of “The Fairly OddParents,” of course.)

DJ’s shtick was being presented as a “mama’s boy,” as some of the show’s other characters called him. Not only was he dedicated to his mother, but, like Cameron, was also quite friendly toward the other contestants. Being fairly strong also helped his team in a few challenges. On top of that, DJ also had two loves: nature and cooking.

Unfortunately for him, DJ’s flaws led to being eliminated during each season he appeared in. Among DJ’s flaws was his occasionally being too willing to be cooperative (to the point of being a pushover), and being fairly cowardly. The first season’s horror film challenge saw him losing the challenge fairly quickly. DJ ended up doing an “instant door” (as “Garfield and Friends” aptly calls cartoon characters running through a wall) after being scared out of his wits.

During the third season’s “Total Drama World Tour,” DJ ran into a streak of bad luck with animals. He kept either getting attacked by or accidentally injuring animals. This led to him believing he was “cursed.” (Of course, his gag in the opening credits for “Total Drama Island” is being attacked by some animals…)

DJ made a cameo appearance in “Revenge of the Island.” Said appearance was against his will, but required by his contract. He was forced to judge a grossout-themed cooking contest.