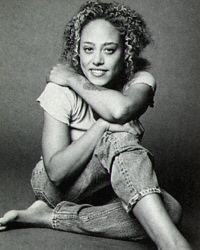 This week’s entry is Cree Summer (also known as Cree Summer Francks). Summer is a recognizable voice actress in the field of animation.

Though born in Los Angeles, Summer was raised on a First Nations reserve in Saskatchewan. Her family is also active in the North American entertainment industry. Her brother was a “VJ” for Canada’s MTV-analog MuchMusic.

Summer’s first major voice acting role was as Penny, the niece of Inspector Gadget. Summer went on to voice plenty of other cartoon characters. Some of her other famous voices include Elmyra on “Tiny Toon Adventures,” Cleo on “Clifford the Big Red Dog,” and Susie Carmichael on “Rugrats.”

Summer also has done live-action acting roles. Her most famous live-action role was as free-spirited/hippie-ish student Winifred “Freddie” Brooks on NBC’s “A Different World” (a spin-off of “The Cosby Show”). Since “A Different World,” however, Summer’s largely stuck to voice acting. Summer’s also done some singing over her career.

As a teenager, I enjoyed watching “A Different World,” partly out of anticipating my own future college career (which wasn’t remotely similar to what was on TV, of course). Summer was also one of the first non-Caucasian voice actors I learned to recognize, thanks to articles I’d read about “Tiny Toon Adventures.”