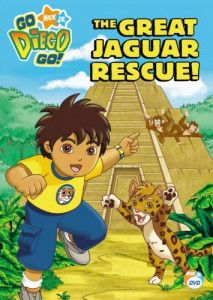 This week’s minorities in cartoons entry is “Go, Diego, Go!,” a spinoff of Nickelodeon’s super-popular preschooler series “Dora the Explorer.”

The series stars Diego, a young boy who rescues various wild animals. Diego was originally introduced on Dora’s show as her older cousin. He also has a teenage sister named Alicia who helps him on his various missions. Diego’s usually accompanied by a baby jaguar named… “Baby Jaguar.”

The show has a few similarities to Dora’s series. “Diego” teaches viewers various Spanish words, and is available in some markets in a primarily-Spanish version. Other similar elements include Diego’s own talking backpack and gadgets. Unlike “Dora,” “Diego” primarily centers around teaching children various animal species, though in a more preschool friendly manner than “Wild Kratts.”

Also in the show’s cast are the Bobo Brothers, a pair of mischievous spider monkeys.

“Diego” debuted on Nickelodeon in 2005, and ran for five seasons until 2011. It became popular enough to even get its own stage show.

Jake T. Austin voiced Diego in seasons 1-3. Austin is more well known for being a star on Disney Channel’s “Wizards of Waverly Place.”