Yes, it’s another infographic from Statista. This time, it concerns live TV programming. Despite the rise of DVRs and on-demand programming, Nielsen reports that live sports is the one area that’s been resistant to such trends. For good reason, I’d imagine. Watching sports well after the event aired (and the game outcome is known) loses something for most sports fans.

Anyway, here’s the infographic outlining how much things have changed in the last decade for TV. 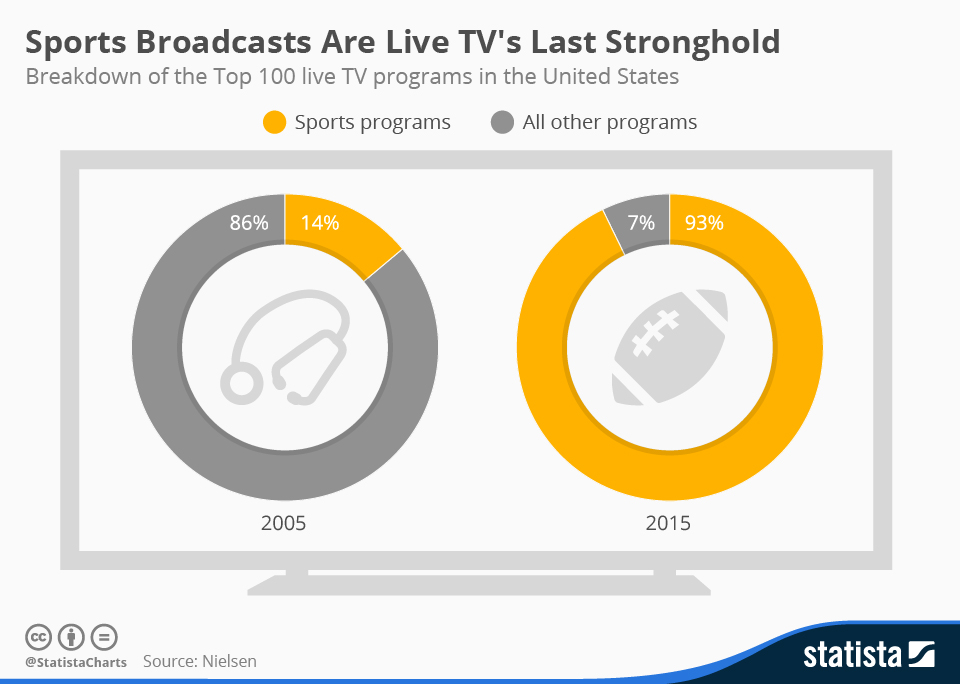 While the infographic presumably includes major broadcast network airings of sporting events, it’s cable that’s probably the main concern in all of this. This is specially with the recent rise of “cord cutting.” Comcast, Time Warner Cable, and others also provide broadband services, and so will continue to have plenty of customers.

Still, they don’t want to lose any more of their cable TV business. Thus, cable companies for now should be pleased to still have live sports (and similar exclusive live events) as their one final trump card.

It remains to be seen how much longer even sports fans will tolerate ever-rising fees for the levels of cable TV service with ESPN, regional sports channels, etc. Sling TV offers ESPN as part of its streaming TV service for $20/month. There’s also various streaming packages for hardcore fans of the NHL, MLB, NBA, etc. Of course, those streaming packages black out local teams.

Depending on how many streaming services you subscribe to, they might not be much cheaper than sticking with cable. (I recommend no more than three streaming services.) Hopefully, the local blackouts will be overcome, as well. It’d remove one more barrier to those that want to ditch cable.

Do you subscribe to a pay TV or streaming service for sports?