Archie is still moving full speed ahead with plans to give Kevin Keller (Riverdale’s new gay youth) his own stand-alone comic. As such, they’ve just released images of Kevin’s first-issue cover (and its variant cover): 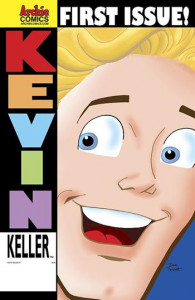 The variant cover’s a parody of old Archie title “Everything’s Archie” (named after the theme song to the original late 60s animated series).

The regular cover is unusual for an Archie comic, which usually have a very traditional and rigidly set layout design for their comic covers. Ironically, the variant is a better example of a standard Archie cover.

And as Bleeding Cool notes, this makes Archie the only mainstream publisher with a regular comic starring a gay male character. DC, of course, has Batwoman in her own monthly comic.