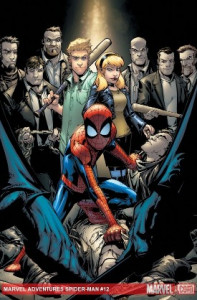 This issue finally wraps up the storyline involving Spidey versus the Torino crime family. We see Captain Stacy and Berto (the head of the crime family) casually chat in Berto’s office about how today would be the “last day in the reign of [the] Torino crime family,” with Spider-Man’s (and Chat’s) help.

The fights between Spidey and Berto’s hoods were enjoyable, as was Berto fervently calling his various hired thugs for help in stopping Spider-Man. The recurring subplot about Gwen dating Berto’s grandson is also brought up, a subplot I gather will have to be dealt with sooner or later. Finally, the story reveals a twist ending, to Berto’s chagrin.

This issue also features a backup story featuring several pages of a story from the “Avengers: Earth’s Mightiest Heroes” comic.

As part of a tie-in to some online video game, we’re getting this one-shot “Super Hero Squad” issue, containing two stories. At least somebody at Marvel still cares about this property; Cartoon Network, in airing the show on Saturdays at 6:30 AM EST, apparently doesn’t.

The first story focuses on Doom’s attempt to destroy the Squad via the use of evil robot duplicates. This goes about as well as expected, of course. The best parts: the Hulk thinking his own head had been torn off (when finding his robot-double’s head); Falcon’s reaction to Wolverine taking out the Falcon-bot; and the most amusing part, the various lines from “Dexter’s Laboratory” muttered by the heroes when knocked for a loop.

The various attempts to cure Foom’s hiccups were amusing. Unlike the first story, the second story features two of the female Squaddies, the She-Hulk and Tigra, though only She-Hulk gets an active part in the story. (We also learn in this world, the Hulk and She-Hulk come from a family of Hulks, based on a line of She-Hulk’s…who knew?).

Hopefully this isn’t the last we’ll see of the Squad, either in comic or animated form…