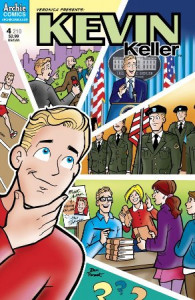 The fourth and final issue of Kevin’s miniseries in “Veronica” wraps up with Kevin having accustomed himself to life in Riverdale. It’s also student election time at Riverdale High, and at Betty and Veronica’s urging, Kevin decides to run for class president. We soon see he’s better than the main alternatives—Reggie (for obvious reasons) and a new character, David Perkins, who’s introduced as “Riverdale High’s star quarterback.” When the final two nominations are between Kevin and David, David engages in a series of nasty campaign tactics to prove why a “real man” (in his words) should be elected class president. We also see that some of Riverdale’s adults, having heard about the election, aren’t the most open-minded, either (as Kevin’s parents overhear in the supermarket). One guess who wins the election…

I enjoyed this wrap-up to Kevin’s miniseries. We see in this issue David, David’s cronies, and the adults at the supermarket trot out some of the usual homophobic stereotypes (theater, “flaunt[ing his] gayness,” etc.). I also liked the part where Kevin calls out David on being a bigot just as Chuck and Nancy (in a non-speaking role) walk past. Also appearing for a scene in this story is Jerry, the kid Kevin helped out in a previous issue. While last issue suggested something about Jerry’s situation would be revealed here, there’s no indication in this story what exactly is amiss for Jerry’s home life (though I can take a few guesses). Maybe we’ll see Jerry’s backstory in Kevin’s ongoing series?

I noticed that Midge was among the candidates running; a “Reggie vs. Midge for class president” story in itself would also be entertaining (with Moose lurking about). Speaking of which, Reggie himself finally gets some interaction with Kevin, which Reggie hasn’t had until this point. The story points out Reggie isn’t that sleazy to stoop to homophobic tactics to win office.

Kevin will be back next month in “Life With Archie” (the wedding story), then return as his conventional teen self for the first issue of his own ongoing series. The comic’s last panel claims this will come out in March, and not February as previously announced.