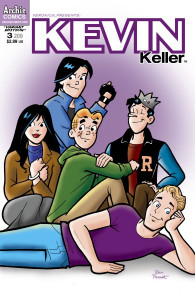 The third issue of Kevin Keller’s four-issue miniseries shifts focus to Kevin’s new life at Riverdale High, where he’s been tapped by Dilton to represent the school on a high school TV quiz show. Unfortunately for Kevin, there’s one problem: he’s nervous about speaking in public… not helped by his memories (told in flashback) of being teased constantly by a bully in junior high and a disastrous school speech. The issue ends on a bit of a cliffhanger involving the (former?) bully appearing in the present.

Another enjoyable installment. We learn that Kevin’s got an interest in history, and some interest in politics as well; he mentions having read the book “Game Change.” I also liked the references to “Jeopardy!” (the Watson computer appearing, called “Webster” here), as well as a reference to rival comic company DC (Jonah Hex).

Per my earlier remark about possibly using some of the “new kids” for Kevin’s solo series (or using one of them as Kevin’s possible date), a few of them appear in this issue—long-haired Danny and school newspaper photographer Chloe. *Not* appearing in this issue however, despite appearing on the cover (the alternate cover to the one I used for this post) is Chuck Clayton, though to be fair, Reggie also doesn’t appear in this issue.

The next and final issue will feature Kevin running for class president… and presumably this issue’s cliffhanger being resolved.