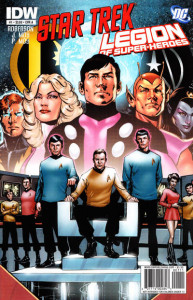 The first issue in this six-issue crossover miniseries between the Legion of Super-Heroes (DC’s heroic teenagers of the 30th century) and the cast of the original “Star Trek” (the *real* originals, not the cruddy reboot versions) kicks off in entertaining fashion.

The story sees the Enterprise reporting back to Earth so Kirk can deliver a commencement speech at Starfleet Academy. “Meanwhile” (if that means anything here) on the DCU side of the multiverse (omniverse?), the Legionnaires are in a time bubble en route to the 30th century (or is it permanently the 31st century these days?). Unfortunately for them, they discover a disturbance in the timestream that forces them to crash-land in the 23rd century… but not the one they know. We also see Kirk and company beam down to Earth… but not the Earth *they* know, either. The Earth both teams have landed on is somehow what looks like a hybrid of the world of “Star Trek” and the Legionnaires’ past (aka the DCU’s near-future—the world of Tommy Tomorrow, Space Ranger, and the other Golden and Silver Age sci-fi comics set between the 21st and 30th centuries). However, there’s also a bit of Trek’s “mirror” universe tone thrown in for good measure, as Earth is a dystopic disaster, with humans as a warlike conquering culture who apparently have it in for Durlans (the shape-shifting natives of Chameleon Boy’s home planet Durla).

This was a nice start, though I assume the next issue will see both teams actually meet. Can’t say exactly at what point in Star Trek:TOS continuity the Enterprise crew are from (besides apparently during or just after the original series’ run, based on the uniforms), but the Legionnaires come from some point after the “Great Darkness Saga” storyline. Still hoping for a Superboy reference in an upcoming installment!

The book helpfully lists a “role call” for both casts inside the front cover, with brief one-line descriptions of their abilities or roles. That might help Trek fans unfamiliar with the Legion (or vice-versa). The cover also lists in the UPC symbol box that the issue’s “not suitable for children under 13,” even though I don’t think there’s anything that would be objectionable to older children. There’s only one curse word (a mild one), and while there’s violence, it’s the type one would find in a battle scene in a “Star Trek” episode (or other sci-fi fare like “Star Wars”).

The comic comes with a backup feature, an 11-page preview for another IDW comic called “Memorial,” with the first issue due in December. Also written by Chris Roberson, the comic involves a woman with amnesia (nicknamed “Em”), and some mysterious person based in the Everglades trying to get an object that falls into Em’s possession.