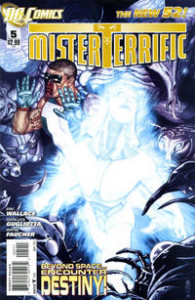 This issue wraps up the current storyline (Michael abducted by aliens), and while it’s better than the previous issue (nobody here mentions being someone’s “space bitch”), I’m still dropping it now that the storyline’s wrapped up. Though it doesn’t matter, as the comic is being canceled by DC, to make room for Yet Another Batman Book (plus five other comics)…in case literally one-fourth of DC’s current output being Batman related somehow isn’t enough for the Bat-fans. I really wished this series had been better done, as I’d wanted to see Mister Terrific succeed.

The story sees Michael and the other freed prisoners repel their alien captors, but when they plan to detonate their former “cargo,” Michael must encourage one of the prisoners (Py’lothia, an intersex individual) to help use their powers to save the day. There’s also the other subplot of the book (a hostile takeover attempt on Michael’s company) touched upon.

While obviously the DCNU version of Michael is quite proud of his African-American heritage, it’s handled somewhat less heavy-handed than in the last issue. I thought the aspects of Py’lothia’s background was better done than I’d expected, though since Py’lothia is likely a one-shot character, Py’lothia won’t be showing up at any Teen Titans meetings anytime soon. (Unless Py’lothia develops a chip the size of the Rock of Gibraltar per the general tone of the DCNU, anyway…)

With the Justice Society getting their own book back this year, I assume we’ll (eventually) learn which Earth Michael lives on (I’d assume Earth-2), and if Earth-2, what the heck is up with this series’ Karen Starr not operating as Power Girl. (Though Power Girl and the Huntress’ “World’s Finest” series supposedly has them stranded on Earth-1, so…)