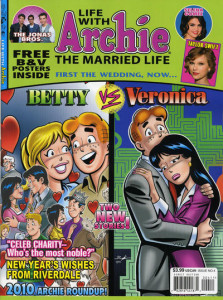 In this month’s “Veronica” storyline, Archie’s in Vegas at a convention per orders from his boss and father-in-law, Mr. Lodge, who’s continuing his descent into Mr. Burns territory with his plans to buy up and develop the town. Archie, however, decides that he’s had enough of being passive about his situation, and decides to do something about it. Meanwhile, Betty returns to New York and tries to survive the best she can (running into the “Veronica” timeline’s version of the adult Ambrose in the process), and Veronica also realizes it’s time to stop being passive about her and Archie’s situation.

Over in the “Betty” alternate-future, Mr. Lodge’s plans to ruin Archie and Betty’s lives is in full swing and seems to be working, though circumstances give Betty an alternative. Meanwhile, Midge has second thoughts on marrying Jughead, while Mr. Lodge doesn’t think much of Ronnie dating Reggie (who has his own problems). Chuck and Nancy also make an appearance, working on their separate comic projects, Chuck for MLJ Comics (presumably in Archie’s world, their version of MLJ Comics never changed its name to “Archie Comics,” for obvious reasons) and Nancy for “Stark Horse” (“Dark Horse,” of course).

This issue was OK, though the tone of the stories feel like a setup for something bigger coming along in next month’s issue, particularly the “Veronica” storyline. Nice to see Ambrose included in the “Veronica” future as well, albeit with more of a cameo role. Reggie’s father’s ownership of the “Riverdale Gazette” is also brought up again in the “Betty” story. While a fact sometimes mentioned in the regular Archie titles, it’s usually just as a means of explaining Reggie’s upper-middle-class/upper-class (but not Veronica-level wealth) status compared to his rival Archie.

“Life With Archie” continues its usual teen magazine-style extras. One extra is a page with Chuck and Archie imagining what they’d look like if they were singers Usher and Justin Bieber respectively. Another celebrity piece discusses the charity efforts of stars such as the Jonas Brothers (recently parodied as “the Jonah Quadruplets” in a “Betty & Veronica” story), “Daily Show” host John Stewart, Selena Gomez (of Disney’s “Wizards of Waverly Place”) and singer Taylor Swift. There’s also several pages wrapping up the year’s developments for Archie Comics, and a page asking the (regular teen versions of) Archie gang their New Year’s resolutions. (Moose’s resolution might make for an amusing story idea.).

Finally, the next issue page shows the February 2011 issue (the issue after next) will feature the announced revival of “Li’l Jinx,” presented here as a teenager and not a grade-schooler. The pencil artwork also looks nice, and suggests a bit of a departure from the usual Archie house style.. Not sure what this’ll mean for the page count of the magazine, if they have to accommodate Jinx *and* the usual two features/celebrity stuff.