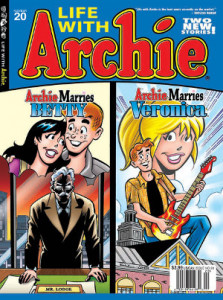 “Life With Archie” continues the shift toward the character’s lives sans multiverse-hijinks (for the most part). On the “Veronica” side, Ronnie’s legal woes are dealt with, Reggie’s reality show rolls along, Jughead’s romantic life gets a spark, while Clay Walker gets some page space (more on that below). Chuck also gets page space, dedicated to his and Nancy’s continued arguing over their longtime favorite subject, their respective cartooning/writing careers. (Chuck and Nancy’s shop, amusingly, stock old MLJ/”Red Circle” Archie superhero titles…)

On the “Betty” side of things, there’s an emphasis on increased responsibilities by the cast. Archie’s shown mentoring his music class, Betty deals with troubled student Georgia, Dilton decides to start his own tech business (of some sort), and Jughead shrugs off his now-former would-be franchisees. The most interesting new responsibility, however, falls on Veronica, as Lodge Industries’ new CEO (which should make for interesting storylines). Jellybean also gets storyline hints dropped about her; I suppose she’s the most flexible character here, given she’s a virtual blank slate character-wise (being an toddler/preschooler in the regular-universe stories). Cheryl also is shown returning to Riverdale, with her twin brother Jason behaving like a loving sibling (versus his usual egoism, though he’s usually been shown in stories as caring for his sister).

Elsewhere, apparently “Veronica”‘s Mr. Lodge’s forgotten about the multiverse-aspects as well… sort of. “Betty”‘s Dilton doesn’t seem to show much memory either, though it’s hard to tell. Clay’s presence in the “Veronica” story presumably will lead into his big role in an upcoming “Life With Archie” storyline (which has already been spoiled in press releases and upcoming solicitations), which I’m hoping doesn’t end as badly as it could. Then again, despite the melodramatic tone of “Life With Archie,” this isn’t Marvel or DC, so maybe I shouldn’t be too worried…