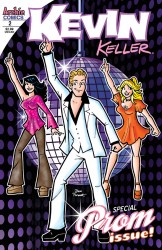 In the second issue of Kevin’s ongoing series, we see it’s prom time yet again at Riverdale High. As class president, Kevin (with help from Veronica, who’s on the prom committee) decides on the 1970s as this year’s prom theme. Meanwhile, however, Kevin finds himself getting notes in his locker from a “secret admirer,” and ponders who to choose to ask to the prom.

While I’d wonder if teens nowadays would rather just use email or Facebook instead of notes in a locker, it was a nice story, with the “admirer” not turning out as I’d half-expected (a prank from Reggie, Veronica still pining for Kevin, etc.). Though I was hoping we’d see Kevin at the prom with an actual date… which makes me wonder what happened to the guy he went to the film festival with in issue #1. Maybe it didn’t work out? Or the guy found his own separate prom date?

And yes, it’s another issue that shows Kevin’s not the only gay guy in Riverdale (or at Riverdale High school). Though wonder how soon before they’ll show Kevin actually kiss someone in a story, which I suppose is another barrier to eventually be crossed in mainstream American children-oriented media. (And no doubt attracting the One Million Moms’ attention over that…)