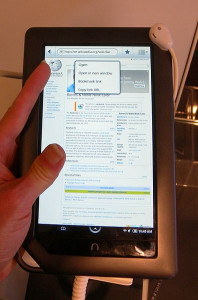 This week is the annual Consumer Electronics Show in Las Vegas, during which the tech world (and tech websites) will be inundated with electronics news of all sorts.

I’m particularly interested in news about any tablets announced. On the heels of the iPad’s success, this year tablets will probably be the dominant product, attempts at pushing 3D TVs on the public aside. I’ve been considering buying one to read magazines and some comic books on, plus the public library apparently offers some ebooks for checkout as well. Since I don’t want an iPad (too expensive and proprietary/not Linux compatible), that leaves me to look at the various tablets that’ve hit the market. There’ve been a massive pile of tablets released; however, most of them have proven mediocre at best, or are locked down in some way (many of them not having access to the Android Marketplace, etc.).

I expect CES will announce some interesting new tablet model(s) coming out, though most of them probably won’t be released for months. Android, the OS behind most of the tablets, is supposed to have a big upgrade later in 2011 (“Honeycomb,” or version 3.0) that’s more supportive of tablets, though I’d assume most of the ones being made today will be upgradeable.

The most attractive tablet to me so far is bookstore Barnes and Noble’s Nook Color, which at $250 is an ideal price range for what I’d pay for a tablet. Reviews of it are mostly positive as well; it seems well-made, is in color (natch), and is backed by a major bookstore chain. It’s being sold by Barnes and Noble as a color ebook reader with some “extra functions,” and seems to have some niche between being a tablet and being a plain ebook reader (like the Kindle). The Nook Color, like many other tablets, won’t have access to Android Marketplace; instead, B&N says they’ll be making their own app store for the Nook Color, with encouragement toward reading-oriented apps. I’d hope this will mean comic-related apps, but otherwise, encouraging their own app store instead of using Marketplace makes me a bit wary. I don’t want a repeat of the situation with WebOS and my Palm Pre. However, the Nook Color is easily rootable, to turn it into a full-fledged Android tablet (with Marketplace support), but I’d rather not do that if possible. Comixology, one of the dominant digital comic websites, is offering a beta Android app, so hopefully Barnes and Noble will offer that for the Nook Color. Otherwise, the Nook Color supports .PDF files, so converting other formats (like .CBR/.CBZ) to it shouldn’t be difficult.

There’s also the Archos 70 and 101 line of tablets, for about $25 more than the Nook Color. While not tied to a specific retailer like the Nook (and also Marketplace-free), there seems to be a bit of a shadow over it: Engadget in a review claims its build quality is decidedly lacking.

I look forward to seeing what CES announcements will come, but that aside, I’d also appreciate any suggestions from others for a tablet (or tablet-meets-ebook-readers like the Nook Color).