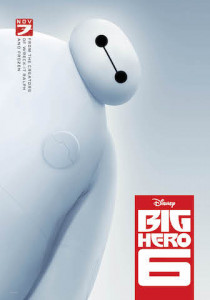 This week’s top film is “Dumb and Dumber To,” which opened with $38.1 million this weekend at the box office. Gather audiences wanted to see Jim Carrey in a high-profile (or familiar) comedy more than was expected, despite being a sequel to a 20 year old film.

Coming in second place is “Big Hero 6.” The Marvel/Disney superhero film earned $36 million (-35.9% from last weekend). Its totals now stand at $111.7 million domestic, $36.7 million overseas, and $148.4 million globally. Forbes notes it’s the biggest second weekend for a non-Pixar Disney film ever, which is promising for its future, though they wonder how it’ll do against “The Penguins of Madagascar” in a few weeks.

“Interstellar” came in third place, earning $29.2 million (-38.6%). Its totals stand at $97.8 million domestic, $224.1 million overseas, and $321.9 million globally. With more than two-thirds of its earnings from overseas, guess it’s a bigger hit outside North America than here.

Entering the top ten in tenth place is the film “Birdman,” a Michael Keaton film about a washed-up actor who played a Batman-like superhero trying to mount a comeback as a more serious actor. It’s been popular in the arthouse film realm, and has been getting more and more play in mainstream theaters. “Birdman” earned $2.5 million this weekend (+6%), for a total to date of $11.6 million.