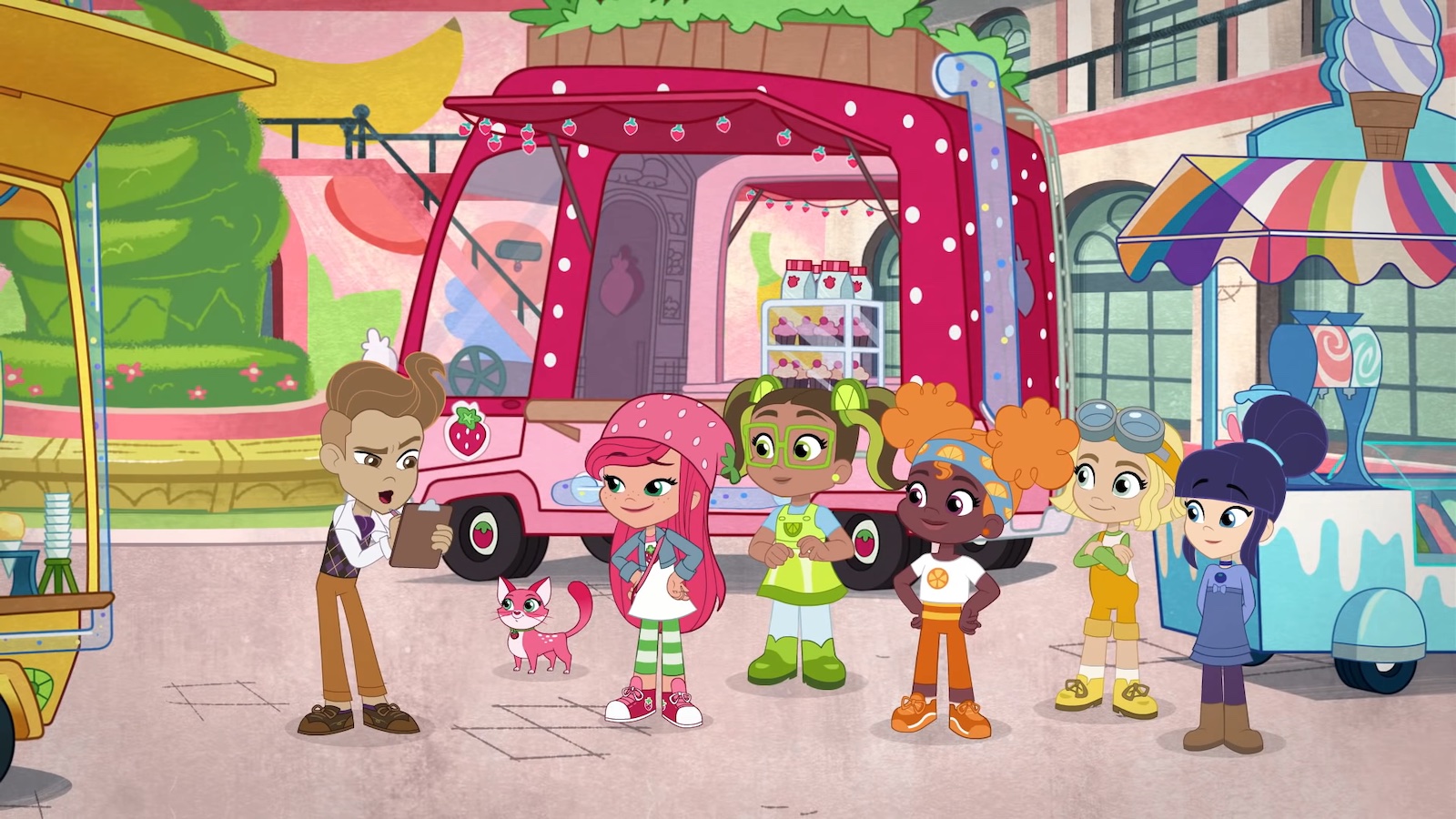 Today’s review is of the 2021 Strawberry Shortcake cartoon, “Berry in the Big City.” The series is available on YouTube and Netflix.

For the unfamiliar, the Strawberry Shortcake franchise is about a girl named Strawberry Shortcake. Strawberry’s world is baking/food-themed, with “Flintstones”-style punny dessert/fruit/food names for buildings, cities, people, etc. For instance, the New York City stand-in is “Big Apple City,” complete with places like the “Cumin-Thyme Museum,” “Washington Apple Heights,” and “Bloomingberry’s” department store. Similar to the Smurfs’ use of “smurf” as a verb/noun/adjective, “berry” gets used similarly. In the 2021 series, it seems to replace “body” or “people” as a term: “everyberry loves my desserts!”; “hey, you berries, over here!”; Strawberry referring to herself as a “country berry”; and so on.

Strawberry herself is into baking, well, strawberry-themed desserts, including the eponymous shortcake. Her friends include other girls such as Orange Blossom (an African American girl into oranges/orange juice), Blueberry Muffin (who’s into blueberries), and Raspberry Tart (who’s into raspberries). There’s also Huckleberry Pie, one of the franchise’s few male characters. The franchise’s main villain is a middle-aged, Dick Dastardly-like crooked baker named the Peculiar Purple Pieman of Porcupine Peak.

“Strawberry Shortcake” was originally a line of greeting cards and fruit-scented dolls. In 1980, the first in a series of animated specials aired on TV in syndication. I assume even if anyone complained about it being a half-hour ad, Reagan’s election later that year and subsequent FCC-led TV deregulation would’ve rendered complaints moot. These specials tended toward being very cute and syrupy, complete with a talking sun (similar to the Kellogg’s Raisin Bran mascot) that acts as the narrator.

As far as “cute” cartoons went, Strawberry Shortcake was popular in the 80s, enough so that she still appears in parodies and nostalgic references to this day. A Honda car ad in 2014 played into both.

Like virtually everything else from the 80s and 90s, Strawberry received some reboots and revivals over the years. Along with the 2021 series, previous shows include:

As far as I can tell, most of the “Shortcake” fanbase seems split between favoring the 2003 series or the 2010 series, based on fan art, online references, etc. An IDW comic as recently as 2016 came out, based on the 2010 series.

“Berry in the Big City” summary

In 2021, another reboot of “Strawberry Shortcake” debuted, as a cartoon titled “Berry in the Big City.” Unlike all of the previous versions, everything in this series is more “down to earth”: no magical elements, talking animals, or rivers made of chocolate. The tone feels reminiscent of a baking-themed “DC Super Hero Girls” or “My Little Pony: Friendship Is Magic.”

“Berry in the Big City” sees Strawberry and her cat Custard move to Big Apple City, where Strawberry and her friends run food trucks at “the Berryworks” marketplace. Most of the core franchise cast is here, though with very different personalities. Strawberry (and some of the other cast) can also talk to the viewers in reality show-like camera cutaways.

Besides Strawberry, the cast includes:

Also back in this series is Strawberry’s old enemy, the Purple Pieman. Here, he seems to have pulled a “Lex Luthor” and is now a major baked goods businessman and celebrity chef.

Overall, I found the series entertaining, after running across it on Netflix. Before then, I hadn’t thought much about “Strawberry Shortcake” in years, though enjoyed it as a kid. However, some hardcore fans of the previous versions might not like “Berry in the Big City” making major changes in some characters’ personalities. They also might not like (as of this writing) the lack of the previous versions’ fantasy/magical elements.

I also give points to the “Strawberry Shortcake” franchise being LGBTQ-inclusive and normalizing, especially with current events.

Image from “Strawberry Shortcake: Berry in the Big City.” (WildBrain)

One thought on “Cartoon review: “Strawberry Shortcake: Berry in the Big City””