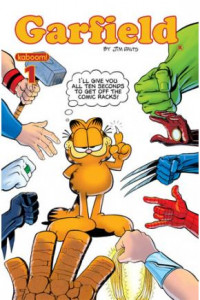 Here’s the roundup for various other comics out in May, such as it is; not much of interest (or no information) so far, but I thought I’d put up what I have, anyway.

“Reed Gunther” has no regular issue this month, but does get a trade paperback release.

After some disappointment with how the Star Trek/Legion of Super-Heroes miniseries is wrapping up, I don’t think I’ll be buying another such Trek miniseries anytime soon, but the debut this month of IDW’s crossover between “Star Trek: The Next Generation” and “Doctor Who” does sound interesting.

Coming out in May from Boom! is the first issue of a “Garfield” comic book, written by Mark Evanier (of “Garfield and Friends”/”The Garfield Show” fame). The cover alone (shown above) I find amusing…

IDW’s releasing a hardcover “Archie’s Americana: Best of the 70s” book. Not sure how it differs (if any) from the existing two trade paperbacks of 70s stories Archie’s put out…