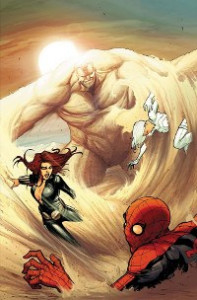 Based on the new Spidey TV show, the first issue of “Ultimate Spider-Man Adventures” is out this month. Not to be confused with the similarly-named “Ultimate Comics Spider-Man” title starring Miles Morales… wonder if renaming the latter “Miles Morales, the <Adjective> Spider-Man” or something might help.

In “Amazing,” Spider-Man (and fellow summer movie stars the Avengers) fights the Sinister Six across the world (per some plan of Doctor Octopus’). Sounds fun…

Ultimate-Spidey sees appearances by (Ultimate versions of) the Prowler and the Scorpion.