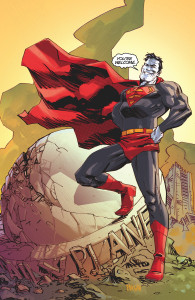 This month sees “Li’l Gotham” get its own trade paperback. Also of interest on the compilation front is a third volume of the “Man of Tomorrow” archives, which collect the Silver Age run of Superman stories. There’s also a new Showcase volume, this time of 1970s war comic “Men of War.”

From the solicitation for “Superman,” it seems Lois has been upgraded from “secondary character” to “best friend.” Next thing you know, they’ll do something crazy like make Lois Clark’s girlfriend.

“Scooby-Doo Team-Up” sees its second issue feature Scooby teaming up with Ace the Bat-Hound to face the Scarecrow. Ace and Krypto have certainly made comebacks in the past decade, between the “Krypto” TV cartoon and various appearances across non-canonical/children’s media, with Krypto himself even making his way back into the DCU proper.