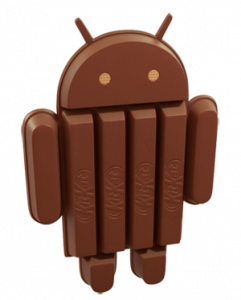 Google’s always chosen dessert-themed names for Android, as listed on this tie-in page, which also advertises Google Play/Android device prizes embedded in select Kit Kat wrappers. As for the spelling, it looks like the Android OS will be named “KitKat” (in camel case), while Google refers to the candy itself as “Kit Kat” (with a space).

And yes, the article’s correct: Kit Kats are made and sold by Hershey here in the United States, but by Nestle elsewhere. No word on whether Key Lime Pie, the previous next-gen name for Android, will be used for a future version. For that matter, there’s no word on whether or not we’ll see future Android versions retain generic dessert names, or also enter into marketing arrangements with other candy makers. Can you imagine Android versions named “Twizzler,” “Dilly Bar,” or “Twinkie?”