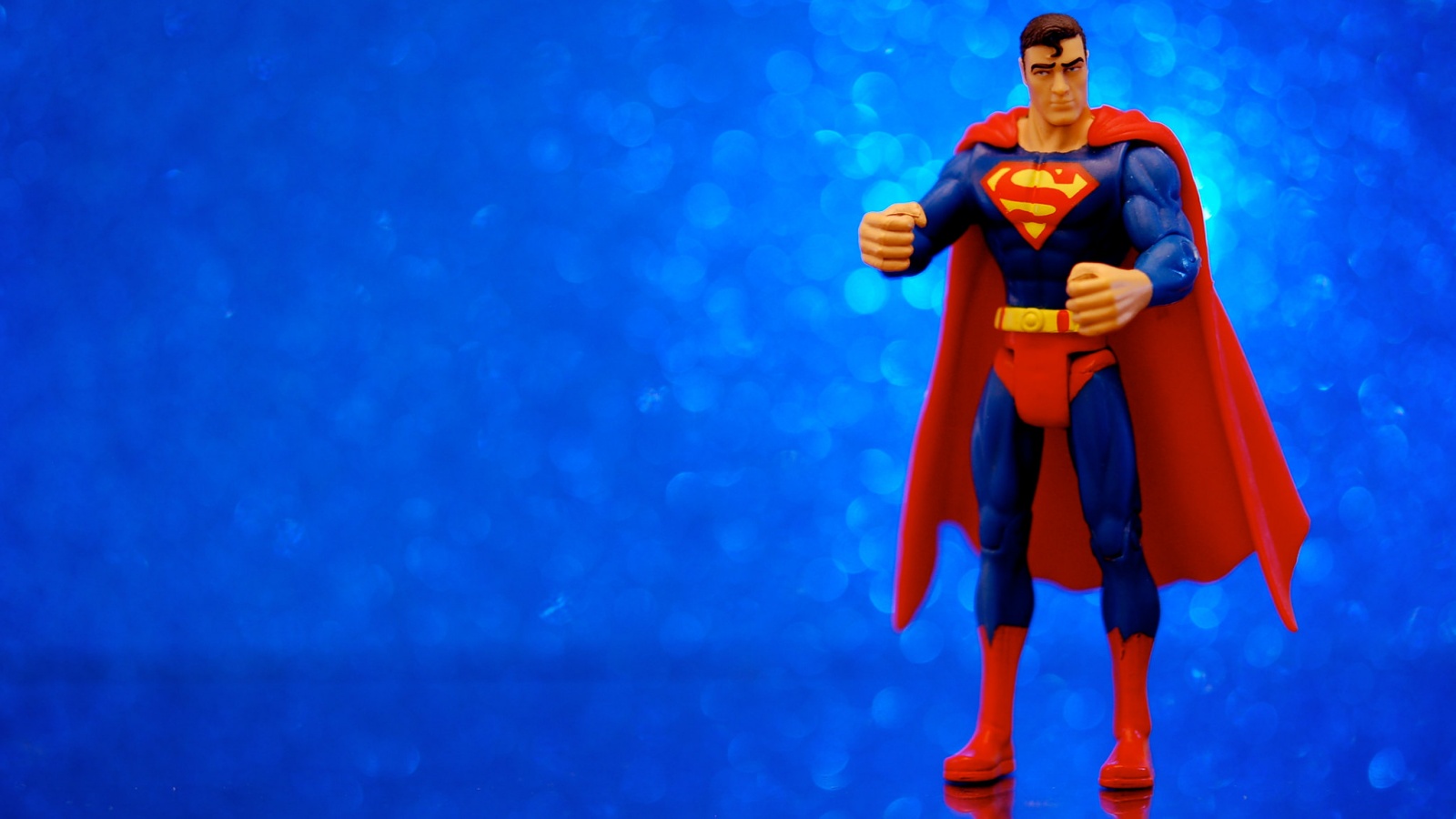 Superman’s had numerous media spin-offs over the decades, from which we received the famous description of his powers (“faster than a speeding bullet…”). The description originated from the 40s Fleischer animated shorts and radio series. However, it became fully crystallized into its most famous form with the 1950s “Adventures of Superman” TV show introduction:

Faster than a speeding bullet! More powerful than a locomotive! Able to leap tall buildings in a single bound!

Yes, it’s Superman… strange visitor from another planet, who came to Earth with powers and abilities far beyond those of mortal men! Superman… who can change the course of mighty rivers, bend steel in his bare hands! And who, disguised as Clark Kent, mild-mannered reporter for a great metropolitan newspaper, fights a never-ending battle for truth, justice, and the American way!

(Note the original 1950s run mentioned Kellogg’s as the sponsor; additionally, the earliest episodes’ introduction closed with the line: “and now, another exciting episode, in the adventures of Superman!”)

While this does manage to summarize Superman’s powers and background, looking at each individual portion indicates how much they’ve changed over the years. Or for that matter, why some elements of that introduction still exist (such as the “leap tall buildings” part).

Faster than a speeding bullet…

When Superman first appeared in 1938, his speed seemed limited to keeping pace with, or outrunning, a fast moving car on a highway.

That said, his speed increased pretty quickly early on. When the “Adventures of Superman” radio show debuted in 1940, he was described as able to “race a speeding bullet to its target.” By 1947, Superman could use his speed to break the time barrier for the first time (“Superman” #48, October-November 1947), an ability that stayed with him until the Byrne reboot in 1986. (Yes, the Reeve movies show him doing such, though the comics placed more limits on said ability; a big difference being he couldn’t alter the past.)

As for how fast Superman can move, his top speed’s varied over the decades, largely to match or stay several varying notches below that of DC’s top speedster, the Flash. That said, both heroes move at quite ludicrous speeds regardless. (Never mind that what really sets Flash’s speed apart from Superman’s isn’t just being faster, but his vibratory powers.) The official stance seems to be that Superman outstrips every hero with super-speed that isn’t a Flash (or tied to a Flash); while Flash is still the “fastest man alive,” Superman’s no slowpoke.

More powerful than a locomotive…

In the 1940s, long-distance train travel was much more common than it is today in the United States. The idea of Superman being powerful enough to stop a train must’ve seemed impressive. One Fleischer short shows Superman pulling a load of train cars in place of its engine. That said, most stories nowadays seem to show Superman stopping falling planes more often than dealing with trains.

A 1970s Superboy comic (“Adventure Comics” #457 from 1978) had him find a solution to a runaway train barreling toward people (and Clark operating at half his usual power levels): throw the train into the air (and over the crowd), race ahead and rip up some track as a ramp, and use it to guide the train down to safety. (Take that, “trolley problem!”)

Of course, Superman’s strength’s increased over the years. A Fleischer short shows Superman lifting back upright the “Daily Planet” building, preventing it from collapsing. By 1955 (per the cover of “Action Comics” #211), Superman’s easily capable of lifting the Eiffel Tower (which weighs 7,300 tons for just the metal tower, or 10,100 tons counting the entire structure). Superman’s strength reached its peak in the 1960s, when a few stories famously (or infamously) shows Superman capable of moving planets (including the Earth). Stories since the 1970s have dialed down Superman’s strength, but Superman still easily can outdo the best Amtrak has to offer.

The website CBR has a list of 20 examples of Superman’s top feats of strength, including examples of the aforementioned planet-pushing; apparently, despite the above-mentioned strength dialing back/the 1986 Byrne reboot, it hasn’t completely stopped. I notice the list doesn’t include the 2001 story where Superman moved an alternate-universe’s Krypton (with the help of Jor-El strapping a large rocket to him, but still…).

An amusing take on this phrase is in the 90s “Superman: The Animated Series” crossover movie with Batman. The Joker, upon seeing Superman smash into the building he’s using as a hideout, remarks: “more powerful than a locomotive… and just about as subtle.”

Able to leap tall buildings in a single bound…

Compared to “keeping pace with the Flash” and “bench pressing the Sears Tower,” being able to leap over the latter doesn’t sound as impressive, especially since Superman can fly. Why is this one here? Because it’s grandfathered in from the earliest incarnations of the character.

The very earliest stories showed Superman unable to fly; instead, the Man of Tomorrow could “leap an eighth of a mile” (that’s 660 feet, or 201 meters) or “hurtle a 20 story building.” Flight ultimately came from the Fleischer animated shorts (produced from 1941 to 1943), as it was easier to animate (and looked more impressive).

As such, Superman’s kept flight ever since. (“Super-leaping” is still an official power, but it’s very rarely seen.) He’s even been capable since the 40s or 50s of flying through interplanetary or interstellar space. While the 1986 reboot supposedly ditched this ability (to make him “more grounded”), this ability’s apparently been brought back since. My guess: it’s either writers forgetting how big space is (Clark doesn’t seem to be gone from Earth for an absurd length of time) and/or just because it looks impressive.

Look! Up in the sky!

Given the citizens of Metropolis should be used to a flying man, this line probably only makes sense for, say, his debut or earliest days there.

Alternatively, I saw one comic (“Superman” #276 from 1974, featuring Supes versus a Captain Marvel pastiche) suggest it’s something only tourists visiting Metropolis would say, not the locals.

Superman… strange visitor from another planet…

More like “infant refugee,” given Superman was sent here as a baby to escape his home planet’s destruction.

That said, DC did introduce a character named “Strange Visitor” in 1999, a woman with electromagnetic powers.

Superman… who can change the course of mighty rivers…

Superman certainly bends steel all the time. However, we don’t get to see him “change the course of mighty rivers” very often.

One instance is in the opening page for “Action Comics” #484 (June 1978), which shows the Superman of Earth-2 actually doing the things his famous introduction says he can do. This includes digging a giant ditch to divert a raging river.

And who, disguised as Clark Kent…

From 1938 through the 1986 reboot, Clark Kent was seen largely as the disguise, and Superman (or Kal-El) as his “real” identity. (Though 70s stories started putting more emphasis on his Clark identity and life.) With the reboot, focus shifted to Clark Kent as the primary identity, and Superman as just an alias. More recent stories have partially shifted back to the original, or offer a third option: that the “real” identity is Clark hanging out with his loved ones and pals (Batman, Lois, etc.), with both Clark’s public face (as a “mild-mannered reporter”) and Superman as disguises.

That said, his famous glasses disguise has had varying explanations over the years (some worse than others); however, like leaping tall buildings, it’s a disguise that’s pretty much grandfathered in at this point. Most comics put a bigger emphasis on how differently Clark and Superman behave (which the glasses feed into) to explain his secret identity. Other identity covering tactics traditionally include: creative use of Superman’s powers; Superman robots; shape-shifting friends like the Martian Manhunter; and others disguised as Clark (traditionally, his pal Batman).

As for working at a “great metropolitan newspaper,” this one’s also stuck, despite the changing stature of newspapers over the decades. They’ve broken away twice. Between 1971 and 1986, Clark worked as the evening news anchor for WGBS (when WGBS and the Galaxy Broadcasting System bought the “Daily Planet”). Meanwhile, the 2010s’ New 52 reboot briefly had Clark briefly quit the “Planet” to work as an independent blogger.

Truth, justice, and the American way

The 1940s introductions featured Superman fighting for “truth and justice.” It’s the 1950s TV show that added “the American Way,” likely out of the era’s rise in anti-communism fervor.

Despite this, Superman’s seen as the world’s hero, not just America’s. I presume that, similar to Captain America, “the American way” refers not to blind patriotism, but America’s more positive ideals.