As those of you who’ve followed me on Twitter know, I’d grown fed up with my LG Optimus V (Virgin Mobile) prepaid smartphone. While (as my initial reviews indicated) the Optimus V was a big improvement over my old Palm Pre, it’s since proven to have too many flaws. I was experiencing way too many freezes and crashes, not to mention in the year I’ve been using the LG Optimus V, I’ve had to replace it once (after it outright broke for no apparent reason). Also, the phone specs were way too anemic: only 200MB on-board storage space, plus the phone being stuck on Android 2.2 (“Froyo”).

This weekend, I decided to finally replace it with a more modern smartphone. Since I wanted to stay on Virgin Mobile, I went with their newest model, the recently-released HTC One V. The One V is meant to be the “low end” model in HTC’s One line, versus the high-end One X and middle-of-the-road One S.

So far, the One V is working quite well, and is a much nicer experience than my old phone. I’m not sure how much of this is from the One V running 4.0 (“Ice Cream Sandwich”) or from HTC’s pared-down-for-its-low-end-model Sense UI overlay. Among the niceties on the One V:

Thanks to the increased specs, the apps seem to work more smoothly than on the old phone. One big plus is the Netflix app works well on the One V, at least over wifi. Not sure I’d want to use it at all over 3G, especially with Virgin Mobile (owned by Sprint) now throttling data speeds after 2.5GB/month.

So far, there’s not many downsides to report, besides that Google Maps still freezes/crashes (like it did on the LG Optimus V) when “select a trip” is chosen in the directions part of the app. Fortunately, I can at least look at the bus schedule times for any location. The only other downside (not specific to the phone) is the customer service at the Radio Shack store I bought the One V from leaving something to be desired. I didn’t get the impression the staff was very familiar with their prepaid phone models, plus the sales clerk’s attempt to push their store warranty and phone accessories was annoying. I’d have bought the phone elsewhere, but Milwaukee lacks much in the way of electronics stores within city limits/near my apartment, plus Best Buy didn’t have the phone in stock when I last checked.

I might have more to post about the One V after putting it through more full-fledged use (i.e., a typical work week), but for now, I’m glad I decided to buy the newer phone after all. I’ll keep the old LG Optimus V phone in storage as a backup in case something does happen to the One V…

Here’s a few of the various reviews online about the HTC One V. While most online reviews criticize either the screen size as “too small” (versus 4-inch phone screens) or the low-end processor, they still usually give the One V “thumbs up” overall:

Finally, here’s a few screenshots from the One V: 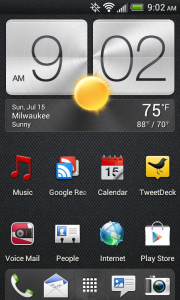 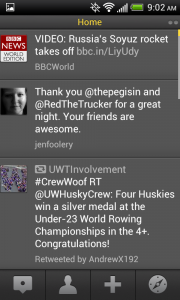