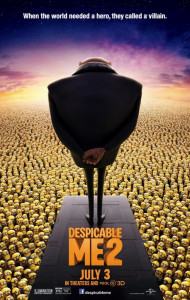 On Monday, it was announced that “Despicable Me”‘s spinoff film featuring the Minions will be bumped back from a 2014 release date to July 10, 2015. This currently puts the film as opening a week before the “Man of Steel” sequel co-starring Batman.

Not only is Universal confident enough in the Minions’ drawing power that they’re willing to move their film from 2014 to an already-overcrowded (in my opinion) summer 2015 release slate, but it’s basically going up against summer 2015’s second-most anticipated film (after “Avengers 2”). It’ll be interesting to see if the Minions manage to trounce the World’s Finest heroes’ box office take, or if Yet Another Use of Batman helps fend off the Minions.

Some on Twitter suggested that there might be two different audiences for the films, given the kid-unfriendly tone of “Man of Steel” (and the Nolan Batman films), while others suggest that some might opt to see “Minions” the first week and then “Man of Steel 2″/”Batman vs. Superman” (or whatever it’s called) the following week. Perhaps… but still, unless there’s an unexpected surprise mass hit in July 2015, there’s a strong chance that the Minions will pull in plenty at the box office, Batman or no Batman, especially overseas. Of course, I assume the box office champ for the whole summer will be “Avengers 2” (again, unless something changes or there’s an unexpected mega-hit).