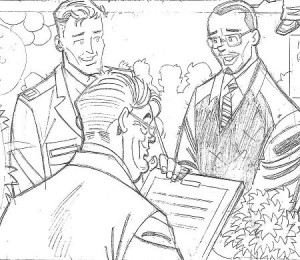 Archie’s released preview artwork for the upcoming issue of “Life With Archie” issue featuring the adult version of Kevin Keller’s wedding. We now know the identity of the lucky guy (as shown by the picture here)!

More about the wedding (and Kevin’s future, so to speak) on Comic Book Resources.

The appearance of the adult version of Kevin reminds me (for some reason) of Steve Trevor, Wonder Woman’s long-time romantic interest. (Though “Life With Archie” writer Paul Kupperberg made a comparison to another DC character instead—Sgt. Rock.)

Also of interest is that it’s also an interracial marriage, as he’s marrying an African-American man (named Clay Walker). Cool!