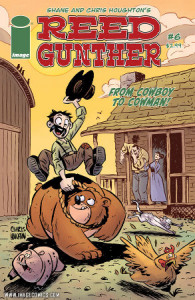 As promised, here’s another post covering smaller-company/independent comics coming out in December 2011. No separate “might buy”/”will buy” lists here.

“Reed Gunther” promises to be a “jumping-on point” this month, so seems worth trying. It’s also recommended by the blog The Brave and the Old.

Looks like Klingons show up in this month’s Star Trek/Legion of Super-Heroes crossover.

Didn’t find anything announced (at this writing) for Boom! Studios, but I’ll add them if/when that changes.