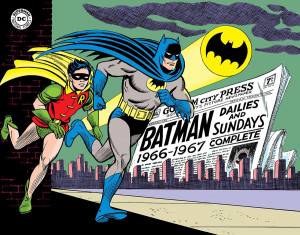 Here’s what’s of interest from various comic companies for January 2014.

Dark Horse is running a few special reprints of the first issues of several new titles for just $1. It might be interesting to try the Captain Midnight title (as much as “skipping from the 1940s into the world of today” reminds me of another certain Captain…).

Another title that might be worth trying is “Revelations” from Boom Studios. If nothing else, I recall Humberto Ramos’ artwork from “Impulse” back in the 90s.

Two superhero newspaper strips are being reprinted. “Batman: The Silver Age Newspaper Comics” reprints the late 1960s/early 1970s run of Batman’s newspaper comic strip incarnation. Wikipedia states the strip started off as campy as the Adam West TV show (that presumably spurred its revival in the first place), but turned more serious with the show’s cancellation/like its comic book sibling. If accurate, the latter days of the strip where Batman doesn’t appear at all, but only Bruce Wayne, sounds interesting. Meanwhile, the Superman volume reprints the Sunday editions of the newspaper comic’s 1940s run. I assume the earlier strips will deal with Superman fighting the war effort, given the era.