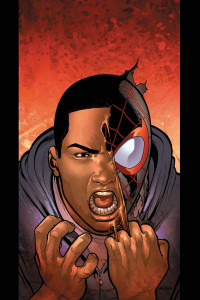 Here’s what’s of interest coming out from Marvel for July 2013. Full solicitations are available here.

I admit my reading of Marvel’s slacked off lately; thus the lack of “picks.” This includes keeping up with Miles Morales’ book. I’ve been attempting to wait for the trade paperback versions of “Ultimate Comics Spider-Man” in an attempt to save money (by borrowing them from the public library). There’s also that Barnes and Noble doesn’t carry much of Marvel’s output digitally. However, seeing how glacial trade paperbacks are being released (and again, not easily finding non-Comixology digital Marvel material) isn’t going so well so far.

Marvel’s solicitations seem to be honest, in spite of their current sequel/prequel/mega-crossover-laden nature. (Such as the one for “Thanos Rising” #4: “Thanos kills a lot of people.”)

In anticipation of the eventual “Guardians of the Galaxy” movie, Marvel seems bent on pushing the characters as much as possible lately, presumably to make them familiar to comics fans by the time the movie’s out.